The Most Venerable Geshe Ngawang Dhargyey was born on the 13th of the fifth Tibetan month in the year of the Iron-Bird (1921) in the town of Yätsak (or Ya Chak) in the Trehor district of Tibet's eastern province Kham. He was soon enrolled in the large local Dhargyey Monastery of the Gelug tradition, where he took pre-novice ordination vows. Although he was enrolled there he studied mainly in the village Sakya monastery, Lona Gonpa where he received instruction in reading, writing, grammar etc, and learned numerous texts and practices by heart. His teachers there included two of his uncles, as well as Kushu Gonpä Rinpoche, who was a master of all the five major fields of learning. 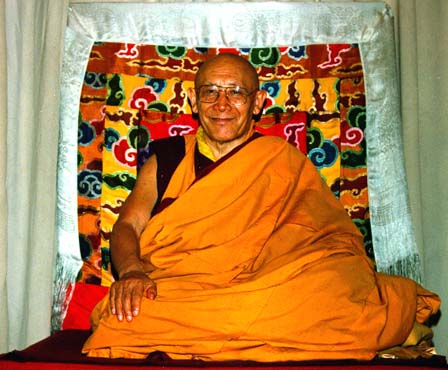 At the age of eighteen Gen Rinpoche left his home country to further his spiritual education at Sera Monastery, the great monastic university in Lhasa. There he underwent extensive training in all the five divisions of Buddhist philosophical study: Logic, Perfection of Wisdom, the Middle View, Metaphysics, and Ethical Discipline. This was interspersed with periods of intensive retreat at some of the many hermitages near Sera. By the time he was nineteen he had already mastered his studies sufficiently to become a scriptural teacher, and he began to have many students of his own. At the age of 21, he took full ordination vows of a Bhikshu from the widely renowned Purchog Jamgön Rinpoche. He also received numerous teachings, initiations and commentaries from the great Lamas of that time such as Kyabje Trijang Dorje Chang (His Holiness the Dalai Lama's Tutor), Bakri Dorje Chang, Lhatsün Dorje Chang, Gönsar Dorje Chang and others. His monastic teachers were the great scholar- practitioners Gen Sherab Wangchuk, Gen Chöntse, and the now Gyume Kensur Ugyän Tseten.

He studied in Sera in Tibet for twenty years until, in 1959, Chinese oppression forced him to leave Tibet. Two years earlier he had been appointed tutor to two high incarnate lamas, Lhagön Rinpoche and Thupten Rinpoche. The three escaped from Chinese occupied Tibet together taking a long and dangerous journey of nine months under Chinese gunfire and snowstorms until they reached the Mustang region of Nepal. From Mustang it was a comparatively easy journey to India, where they joined His Holiness the Dalai Lama and some of Gen Rinpoche's other teachers.

In India, after a brief pilgrimage to the sacred Buddhist sites, he took up his studies once again, and for several continued tutoring the tulkus (incarnate lamas). In the mid 1960s, he was chosen along with fifty-five other scholars to attend an Acarya course at Mussourie (north of Delhi). During his year in Mussourie, he and the other scholars wrote textbooks for the Tibetan refugee schools being established in India at that time. He then returned to Dalhousie where, over various periods, he continued to teach another seven incarnate lamas. He also finished his Geshe studies and, in oral examinations held at the Buxador refugee camp in Assam in eastern India (the seat of Sera monastery at that time) he gained the highest grade (First Class) Lharampa Geshe.

In 1971 he was asked by His Holiness the Dalai Lama to start a teaching program for westerners at the newly constructed Library of Tibetan Works and Archives in Dharamsala, northern India. Two of his incarnate lama disciples, Sharpa Rinpoche and Kamlung Rinpoche, acted as translators. He stayed there, teaching very extensively to thousands of Westerners, until 1984. During this time he himself received extensive and often exclusive teachings from His Holiness the Dalai Lama and from both of the tutors, Kyabje Trijang Rinpoche and Kyabje Ling Rinpoche.

In 1982 he travelled to the West for the first time to take up a one-semester visiting professorship for at the University of Washington in Seattle. This was followed by a year-long extensive tour of Buddhist teaching centres all over North America, Europe and Australasia.

He spent six weeks in New Zealand during this tour, and at the end of the visit he was requested to establish a Buddhist centre here. In 1985 His Holiness advised Gen Rinpoche to come to New Zealand, initially for one and a half years, to establish a centre. After a six month tour of Australia, he arrived in Dunedin in mid 1985. Due to the success of the Buddhist centre he remained here, occasionally travelling to other parts of New Zealand and to Australia on teaching tours. 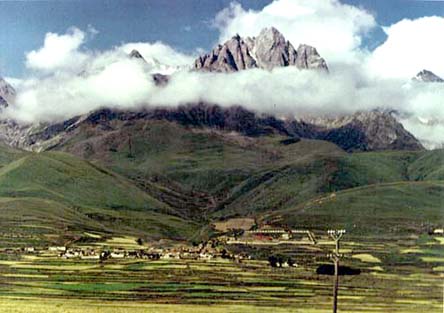 Gen Rinpoche was a wonderful teacher who loved to teach the great treatises, as well as experiential teachings which distilled their essence. He gave his last formal teaching in February 1995 in Dunedin. Gen Rinpoche entered into the death process on the 11th August 1995 (the 16th of the 6th Tibetan month) remaining in meditation for of three days.

His body was cremated with full traditional Tibetan funerary rites at Portobello, near Dunedin on 17th August (22nd of the 6th Tibetan month). Kushu Lhagön Rinpoche, one of Gen Rinpoche's tulku disciples, presided over the Great Offering to His Holy Body Ceremony at a specially built cremation stupa.

His passing away is an immeasurable loss to his disciples and indeed to all living beings.

We offer fervent prayers that we may meet and be taken care of by him in all our lives. There is now new information about his recognized reincarnation, or Yangsi Rinpoche.

Return to the DBC home page.
(c) Copyright Dhargyey Buddhist Centre and Sönam Tenzin. This page was compiled in part from several previously written biographies of Gen Rinpoche by Sönam Tenzin.
Enquiries, suggestions for improvements, and any comments are welcome: E-mail me!
Dharmakara.net