Lhagon Rinpoche was born on June 10, 1942 in Tehor, Eastern Tibet, in the village of Shingtsang Nang. He was the third of seven children, two of whom died while still quite young. 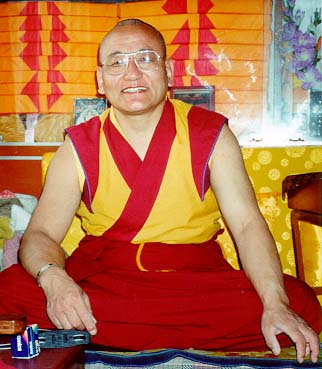 At a very young age Lhagon Rinpoche was recognised as an incarnate lama by Purchong Jamgon Rinpoche. Thupten Rinpoche, born in Lokar, was also recognised and the two young lamas were looked after by the late Venerable Gen Rinchen Tseten at their local labrang (their estate from the previous life), in the monastery called Za Tashi Samdub Gompa. At age five Lhagon Rinpoche took monk's Rabjung vows at the labrang. At age fifteen he went to Sera Monastery and was there for nearly a year until the Chinese invasion made it necessary to escape from Tibet..

It was at Sera Monastery that both Thupten Rinpoche and Lhagon Rinpoche met Gen Rinpoche; indeed they were placed under his care by their tutor Kensur Jampa Khedrup. Gen Rinpoche was responsible for teaching them scriptures. It was only because the two young lamas persuaded him that Gen Rinpoche fled Tibet; they insisted that if he stayed in Tibet they would also. (Gen Rinpoche knew that Chinese communist policy was very severe towards tulkus as opposed to ordinary monks, so he decided they should all go to India).

After a circuitous route out of Tibet the much reduced party reached Kalimpong, India where Lhagon and Thupten Rinpoche and their two teachers (Gen Rinpoche and Gen Rinchen Tseten) remained for two years. In 1962 they then went to Dalhousie for seven months and were looked after by Mrs P. Beadie in the young Lama homes. (She was an English woman who set up a school and home for the many tulkus who had arrived in India and had no other place to go. There were tulkus of all four schools of Tibetan Buddhism there, many of whom are now teaching in the West). It was here that a letter arrived from the government in Dharamsala saying that Lhagon Rinpoche must attend a teacher training course in Dharamsala. Hearing that the training was 'strict and tough' he wasn't keen to attend but The Dalai Lama's senior tutor Kyabje Trijang Rinpoche told him he must. After one month Lhagon Rinpoche still wasn't enjoying the experience so went back to Kyabje Trijang Rinpoche who repeated that he must stay there. Lhagon Rinpoche wasn't the only monk who wished to leave until one day His Holiness spoke to them all. 'Standing' for over an hour, he advised them to continue their training and that thereafter wherever they were sent they must go. So in 1965 Lhagon Rinpoche was sent to teach at a boarding school for orphans in Kalimpong. He was there for eight years and taught grammar, poetry, history, religious history, philosophy and dialectics to classes of children aged between five and fourteen.

In 1973 Lhagon Rinpoche was transferred to Mussoorie where he lived with his first cousin Kesang (who has also come to Dunedin) and with Kesang's mother- his aunt- Sither Drölma. Kesang's mother became to him like the mother he was separated from at such a young age and could barely remember.

While still living in Mussoorie Lhagon Rinpoche was selected as a member of the third delegation who went to Tibet in 1979 for three months on an educational tour. During the tour which was strictly controlled by the Chinese, Lhagon Rinpoche managed to stay for three days with his mother and his family who were living in poor conditions as farmers in Kham. At about this time the Panchen Lama was released from prison and the Chinese also allowed Tibetan children to learn their own language, which previously wasn't the case.

Lhagon Rinpoche has spent most of his life with Thupten Rinpoche separating only when working in different schools. At the invitation of the Dhargyey Buddhist Centre, he came to Dunedin -- arriving in February 1998, two years after Thupten Rinpoche's arrival.

He is at present teaching Tibetan conversation, crafts and ritual practices to western students. He says he is very happy and relaxed here in Dunedin, happy to have a peaceful life doing His prayers and reading scriptures. He has no future plans and so hopes to stay in New Zealand.

'This is a brief account of my life', said Lhagon Rinpoche.

Return to the DBC home page.
Edited from the original newsletter version of Jane Gillespie, this page is designed and maintained by Sönam Tenzin.
Enquiries, suggestions for improvements, and any comments are welcome: E-mail me!
Dharmakara.net