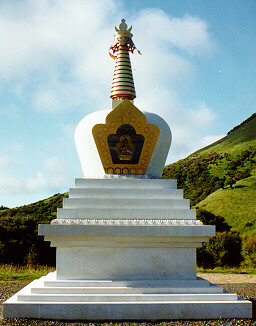 "The Place of Peace and Happiness"

Left: The Stupa built for Gen Rinpoche on the Otago Peninsula. On the day the stupa was consecrated, His Holiness the Dalai Lama announced that Gen Rinpoche would be reborn in the New Year.

The construction of Gen Rinpoche's stupa was finished just in time for the consecrated by His Holiness the Dalai Lama, although completion just four hours before His Holiness's plane touched down at Dunedin Airport might be thought to be cutting it a little fine. But the freshly finished stupa looked magnificent, the weather was perfect for the consecration (which surprised some of our northern visitors I don't know why), and His Holiness consecrated the stupa in a more extensive ritual than we had dared to hope for considering his very busy schedule. It was a wonderful day.

As might have been expected, since building a stupa was new to all of us here and we were pressed for time, we did have a budget overrun. And some consequent anxiety. But thanks to those who once again generously contributed, we have paid for all major construction costs. That's a great achievement.

There are a few things still to do. Over the summer, once the road up Stupa Hill has dried out after what seems like a month of continuous rain, paving will be laid for the circumambulation path around the stupa. In autumn, Dieter and others who are able to help him, will continue with the planting that we are required to do around the stupa to comply with the Planning Resource Consent.

At the time of the consecration, His Holiness named Dieter's property zhi.de.ling, the "Place of Peace and Happiness", a tribute to Gen Rinpoche himself and a fitting reward for Dieter's generosity and dedication. Many people have asked when they may visit the stupa site and Dieter has very kindly set aside Sunday afternoons for visitors.

Finally I would like to thank everyone whose contributions of one sort or another made the stupa a reality. In particular I would like to mention three people without whom the stupa could not have been completed: our most generous benefactor who wishes to remain anonymous; Dieter who generously provided the spectacular site for Gen Rinpoche's cremation and subsequent stupa; and lastly but definitely not least, Thupten Rinpoche himself whose skill and knowledge and inspiration actually made it all possible. 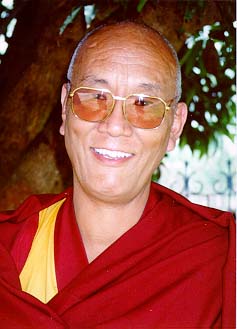 Below: Text of the commemorative plaque in front of the stupa.

Return to the contents page.