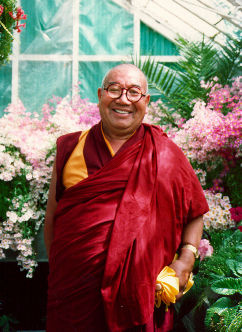 Geshe Ogyen Tseten (or sometimes spelt Ugyen) was born in Eastern Tibet in 1914, and with 19 years enterred Sera Monastery - one of the great monastic universities of Tibet. He studied and practised there for almost forty years becoming a Geshe of highest calibre, and then entered the Gyumey Tantric College to complement his general Buddhist training with the specialised study of tantra. Over this time he devoted himself to many great teachers and received numerous instruction and practice lineages. With the communist Chinese clampdown in Tibet in 1959, he escaped to northern India where he spent many years teaching the monastery monks and others.

In 1967 the Dalai Lama asked him to go to Switzerland to set up and be abott for a new monastery near the town of Rikon for the Tibetan refugee community there. He gave many teachings to the Tibetans until 1974, when he went to India to be Gyume Tantric College Abott. Later he returned to Switzerland, and with the Dalai Lama's blessing he completed 'great retreat' over a period of five years.

In the mid 1980s, starting with a Buddhist centre in Hamburg, Germany he then began to visit many Buddhist Centres for westerners all over Europe and in Australasia giving numerous teachings and initiations. At the request of the monks in Sera Je Monastery in South India, he returned to India and has been teaching the monks there since, while occasionally visiting other countries to give teachings to westerners and Tibetans. Among his students are most of the senior geshes and tulkus of Sera Monastery, as well as thousands of geshes and younger monks and lay people all over the world. For many senior geshes and tulkus, such as Lhagön Rinpoche and Thupten Rinpoche, he is the only one of their lamas apart from His Holiness the Dalai Lama who has not passed away.

In the summers of 1989-90 and 1992-3, at his student Geshe Ngawang Dhargyey's request, he visited Dhargyey Buddhist Centre in Dunedin and gave many teachings, initiations, transmissions and ordinations.

He spends most of his day from early morning in meditational practice and is always greeting all with love and kindness, and untiringly and without any bias giving care and advice to whoever is in need. Currently he is based mainly in Sera Monastery during the northern hemisphere winter and in europe in the rest of the year..

For more information go to the website of Geshe Ogyen Tseten.